To open the power management section of your device, select the tab as displayed in the screenshot below.

The inverter decides how to utilize solar, grid and battery based on the output source priority setting as described in the manual. Sometimes you want to manually adjust due to weather, power usage expectation or other factors.

If automatic power management is enabled, the output source adjustment is only enabled for a certain amount of time.

Once enabled during automatic power management, it will display a notice as shown below. 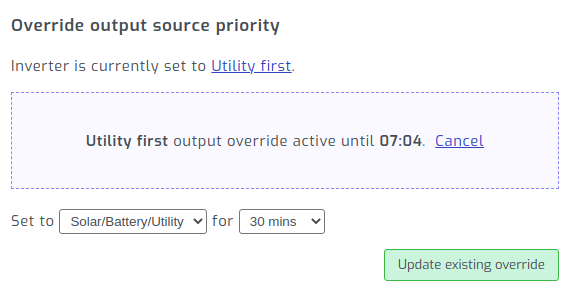 Without SolarAssistant, the inverter switches between grid and battery based on the battery voltage as shown below. Typically you will find that with lithium batteries, there isn't a good value for these grid/battery switching settings. Selecting a value too low risks the battery triggering a low voltage cutoff where the whole system will shutdown and require manual intervention to power up again. A higher setting will typically switch to grid to eagerly and loose out on potential energy savings.

SolarAssistant can perform automatic power management based on the battery state of charge which is a massive improvement over the scenario described above. The inverter voltage settings described above will still apply, however you can set them to lower values only to prevent a complete shutdown in a scenario where SolarAssistant is disconnected or not running.

Automatic power management works by maintaining a minimum state of charge in the battery. Typically at the beginning of the day, just before solar PV production it's acceptable to discharge the battery to a low charge level such as 30% for lithium batteries because solar production is most likely just around the corner. At the end of the day, you typically want a higher level of charge to allow you to go through the night without being impacted by possible grid power outages.